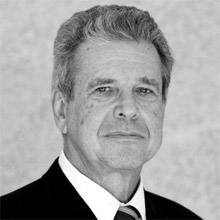 Qualified as a Civil Engineer specializing in hydraulics at the Rio de Janeiro Federal University School of Engineering, he has a Masters Degree in Civil Engineering from COPPE-UFRJ (1973) and a PhD in Hydrology and Water Resources from Colorado State University (1976).

Since 1974 he has been Professor of Water Resources at COPPE-UFRJ. He has been Chairman (as tutor) and participated in dozens of masters and doctorate boards. He is the author of the books "Cheias e Aproveitamentos Hidroelétricos" (Floods and Hydroelectric Uses) (1983) and "Desafios do Regulador" (Regulatory Challenges) (2009), and of more than a hundred technical articles and chapters in specialized books, as well as dozens of articles published in important publications. He was founder director and president of the Associação Brasileira de Recursos Hídricos - ABRH (Brazilian Water Resources Association).

He is a member of the Board of Trustees of FBDS - The Brazilian Foundation for Sustainable Development, the Scientific Committee of the World Water Week in Stockholm, the Academia Nacional de Engenharia - ANE (National Engineering Academy), Conselho Superior de Infraestrutura da Federação da Indústria do Estado de São Paulo - FIESP (Higher Board for Infrastructure of the Federation of Industries of the State of Sao Paulo), Global Water Partnership (GWP) Water Safety Work Group and the Organization for Economic Co-operation and Development - OECD.

He is a Commander of the Order of Rio Branco and the Order of Scientific Merit. He has received legislative medals of merit from the Chamber of Deputies and the Minas Gerais Legislative Assembly, the Distinguished Alumni Award (2012, Colorado State University), the title of Eminent Engineer (2010, Association of Former Students of the Polytechnic) and the King Hassan II World Water Prize (2003, World Water Council).